Commencing in 2014, university to hold only one ceremony 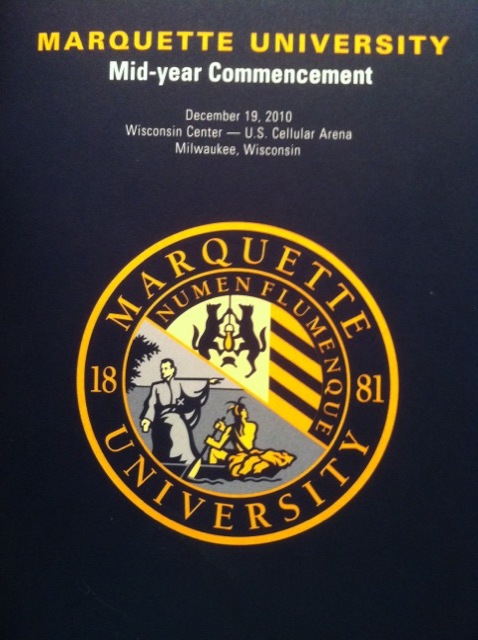 Photo via College of Education

Photo via College of Education

The December 2013 commencement will be the last midyear commencement ceremony for graduating Marquette students.

Mid-year graduates will still be granted degrees when their graduation requirements are completed, but they will only have the option to participate in the annual commencement service in May, which will include all students who have graduated that year.

According to the April 18 brief announcing the change, the university will focus its energy and resources on the May commencement ceremony at the BMO Harris Bradley Center.

“This will allow all graduates to share in university-wide festivities involving high-profile speakers and honorary degree recipients, which have included baseball legend Henry Aaron, Teach for America founder Wendy Kopp and will include Bill Cosby this May,” the brief read.

Provost John Pauly, a member of the Leadership Council, said the commencement ceremonies matter deeply to the faculty and staff.

“Because commencement signifies so deeply to everyone, we want that event to have sparkle and a special polish,” he said. “We have found it difficult to guarantee that same level of quality at our December commencement because of the venues available to us for the size of the group.”

Pauly said the committee decided to focus its energies on the May event and let the colleges offer smaller-scale mid-year ceremonies when needed.

“Receiving a college diploma is a major milestone, and we feel it deserves to be celebrated in grand fashion,” he said. “We decided to announce the change a year and a half ahead of time in order to honor the plans families have made for the December 2013 ceremony and to give our academic units time to plan for the 2014-15 year.”

Elizabeth Bruss, a junior in the College of Arts & Sciences who plans to graduate in December 2014, said her initial reaction to the change was disappointment.

“I feel as though I am being lumped with the next graduating class, a class that isn’t my own,” Bruss said.

Another college in Milwaukee, the Milwaukee Institute of Art and Design, has only one commencement ceremony per year.

“It makes sense for us to have only (one) ceremony,” said Ricky Heldt, the associate director of student services at MIAD and co-coordinator of the school’s graduation ceremony. “We are such a small school, and if we had two or three commencement programs a year, we would have very few students at each.”

Heldt said it is difficult to even compare Marquette and MIAD’s commencement ceremonies because of the schools’ different sizes. Marquette has 8,293 undergraduate students, while MIAD has only 740.

Bruss, a Pennsylvania native, said the cost of having her family travel to Milwaukee for the spring commencement might be a stretch.

“As someone from the East Coast, it may be an extra financial burden if my family and I were to travel back to Milwaukee for a ceremony in May,” she said. “I consider a college graduation ceremony a rite of passage, something that I am eager to celebrate at the time I receive my degree.”

Pauly said the committee will continue to make the commencement as meaningful as possible.

“It will be a priority to secure high-profile speakers who impart meaningful lessons to our new graduates and to offer a full weekend of events for our graduates and their families – many of whom travel from across the country to be here,” he said.