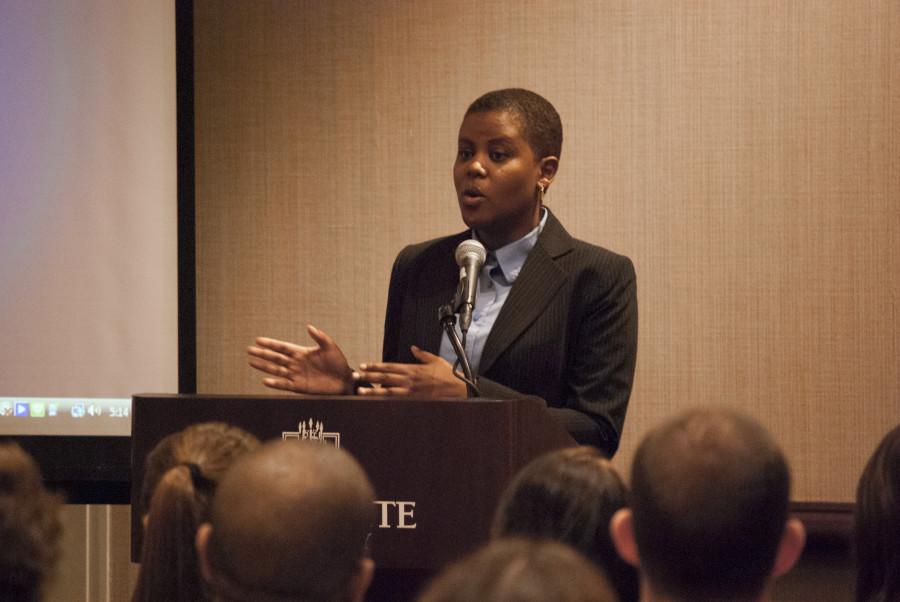 Rwandan genocide survivor Consolee Nishimwe gave a face to the violent conflict Monday night in front of more than 100 people in the Alumni Memorial Union. The Marquette chapter of Step Up, a national group founded in 2004 to raise awareness regarding the Rwandan genocide, sponsored her presentation.

“Her story is one of inspiration, hope and great faith,” said Anne Pasero, the chair of the Department of Foreign Languages and Literatures, in her introduction of Nishimwe.

Ethnic tensions in Rwanda, a small country in southeastern Africa, existed between the Tutsi and Hutu tribes due to the colonial strategy of Belgium, which elevated the status of the minority Tutsis over the majority Hutu population. These tensions escalated and led to the slaughter of between 800,000 and one million Tutsi civilians and a smaller number of Hutus. The violence was sparked by the death of the country’s president and lasted more than 100 days.

Driven by government-sponsored propaganda over the radio, Hutus brutally murdered their Tutsi neighbors. Despite cables from U.N. officers in the area requesting aid, the international community did very little to stop the violence. It stands today as a major historical failure by the international community. The Rwandan Patriotic Army eventually helped stop the conflict.

Nishimwe, who was 14 years old during the genocide, discussed her experiences with her family as they struggled through their daily lives because of the violence.

“We didn’t know what would be our next day or if we would survive,” she said.

While there were some warning signs of the chaos that was about to unfold, such as the now infamous cable from the U.N. force commander in Rwanda that foresaw the impending violence, Nishimwe said the brutality displayed by her neighbors stunned her.

“I never expected anyone would turn around and commit genocide,” Nishimwe said. “People (had) completely changed.”

Nishimwe said women in particular are extremely vulnerable in conflict areas, and that part of her desire to speak out is because many  women cannot tell their stories. Estimates suggest that between 250,000 and 500,000 women were raped during the three-month period. Amnesty International has estimated that 67 percent of them contracted HIV/AIDS as a result.

Reactions to Nishimwe’s presentation were positive and thoughtful.

Ellie Fincher, a Marquette alumna who helped found Marquette’s Step Up chapter, said she was impressed with the presentation.

“She has embraced and embodied forgiveness,” she said.

Jennifer Vanderheyden, the faculty advisor for Step Up, said Nishimwe’s speech was the “definition of courage,” especially given that Monday was the anniversary of her father’s death in the genocide.

Step Up was founded by a professor at the University of Missouri. It aims to help female survivors of the Rwandan genocide recover from their experiences. The Marquette chapter was founded in 2009 after a film festival on campus screened a documentary about Rwandan women. This week, the group is working to raise awareness about those impacted by the genocide.

On Tuesday, Step Up screened a documentary called “From Brussels to Kigali,” which discusses the in absentia trial of one of the major figures involved in the genocide in the Brussels Assizes Court.

Throughout the year, the group raises money for microloans for women who survived the genocide.

Haley Wilson, a sophomore in the College of Arts & Sciences and the treasurer of Step Up, said she joined Step Up because she wanted to support female genocide survivors.

“It’s a group with a purpose,” she said.

Nishimwe said telling her story helps educate people who may not have been alive during the genocide and reminds those who had lived through it of the pain and suffering Rwanda experienced.

“I share (my) stories with younger generations so that it can never happen again,” she said.

Correction: A previous version of this article incorrectly reported that the Ugandan army helped end the conflict in Rwanda. It was in fact the Rwandan Patriotic Army, not the Ugandan army. The Tribune regrets the error.