EDITORIAL: Even in busy offseason, off-the-court priorities should remain 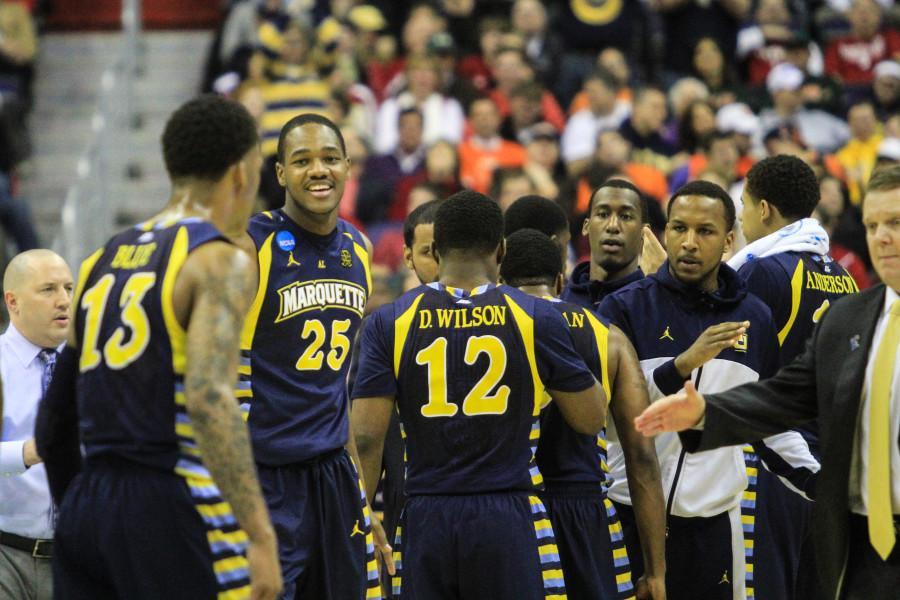 The men’s basketball team celebrate after defeating Miami in the 2013 NCAA Tournament. Including two graduating seniors, six players will not return to the team next season. Photo by Danny Alfonzo/ daniel.alfonzo@marquette.edu

Since we last discussed college athletics more than a month ago, a lot has happened to Marquette basketball. The team shared the Big East regular season title, advanced to the Elite Eight and most recently lost four of its players – redshirt junior guard Jake Thomas, freshman guard Jamal Ferguson, sophomore forward Juan Anderson and junior guard Vander Blue. Thomas, Ferguson and Anderson are set to transfer, while Blue is forgoing his senior season for the NBA draft.

Fans have reacted with a range of emotions, especially about Blue’s decision. Some wish Blue the best, but others are outraged that the team’s leading scorer is darting for the pros instead of returning for a season that many experts believed could be pretty successful for the Golden Eagles. In either viewpoint, however, Blue’s announced departure is the climax of a very noisy offseason in which it has been far too easy to forget that college athletics are about more than winning and losing.

The players’ decisions have raised questions about how this affects the team on the court. As we mentioned last month, however, education and building quality individuals off the court should be at the forefront of any athletics program. We still have concerns about that, not just about Marquette but about college athletics across the nation.

“It’s one of the reasons we oversigned (incoming players),” Crean told the Indianapolis Star.

In other words, with an NCAA limit of 13 scholarships per team for basketball, it was one of the reasons he made promises to prospects he was not sure he could keep.

Losing four players also conveniently puts Marquette under the cap of 13 scholarships. Had at least three of them stayed, Marquette coach Buzz Williams would likely have had to have some difficult conversations with his incoming freshmen about their futures at Marquette. Before these announcements, the Golden Eagles were only losing two players to graduation and were bringing in five freshmen. The math did not add up – Williams clearly oversigned.

This is not to suggest that Thomas, Ferguson and Anderson were nudged out of Marquette. Ferguson and Anderson struggled to find minutes in the Golden Eagles’ rotation this year, and with a top-10 recruiting class coming in, they would possibly experience more of the same next year. Thomas, too, found himself buried in the team’s rotation, and he was going to lose his scholarship next season. He also knew when he transferred here from South Dakota more than a year ago that a scholarship for his third year would be unlikely, and he said in a statement last week that losing the scholarship was not the reason he transferred.

Even so, Williams, like many other coaches across the nation, appears to have lucked out. Oversigning players is a regular practice that requires a transfer or lost scholarship to work, which changes the course of student athletes’ education. How can a team knowingly oversign and still claim education as a top priority? The second a coach oversigns, he or she is guaranteeing that someone will not be able to pursue the education they were promised, or, at the very least, will have to pay full price to get it.

Oversigning tends to occur without much outrage. Penn State men’s basketball was oversigned by two scholarships until just last week, when again, luckily for the coaching staff, two players decided to transfer. Penn State coach Patrick Chambers said in a release about the transfers, “(The two outgoing players) have decided to seek opportunities elsewhere. First and foremost, we want what is best for our student-athletes.” Can Chambers say he wants what is best if, at the very least, he created a situation at Penn State that made these players no longer feel comfortable at the school where they were once committed?

A 2010 “Outside the Lines” report revealed that former University of Miami defensive lineman Stephen Wesley was told just weeks before the 2010 season that his scholarship would not be renewed, and he was effectively cut from the team. Miami football coach Randy Shannon did not offer any explanation for Wesley’s dismissal, but speculation was rampant that he was cut to make room for incoming freshman Seantral Henderson. If that were true, Shannon essentially decided that because Henderson could better help the Hurricanes on the field, his education off the field was more deserved than Wesley’s. If that were true, Shannon broke a promise that could impact a young person for life.

We said in our March editorial that “Once a school starts to disregard academic priorities for athletes for the sake of winning games, it ceases to uphold what it is supposed to stand for and takes advantage of its student athletes in the process.” This holds true for oversigning. We hope more light is shed on the topic, as so many schools are playing Russian roulette with athletes’ educations in doing so.

There is no concrete evidence of any direct wrongdoing by Williams. In fact, because of his redshirt year, Thomas will be finished with his undergraduate education at the end of this semester and will be pursuing graduate school elsewhere. Nevertheless, situations like this raise concerns about the ethics of oversigning and the possibility that Marquette is part of a college athletic culture that is accepting of it.

In signing five players, and thus making them educational promises, Williams had to assume someone besides senior guards Trent Lockett and Junior Cadougan would not be returning next year, even though no one else was obligated to leave. That puts a lot of pressure on student-athletes at a time when they are focused on how to best advance themselves in the professional world – academically or athletically.

Crean and other coaches who are openly OK with this practice make promises meaningless and trivialize education for the sake of an athletic program. Williams, and all Marquette coaches across all sports, shouldn’t be. In offseasons as turbulent as this one, we hope they can at least promise that.