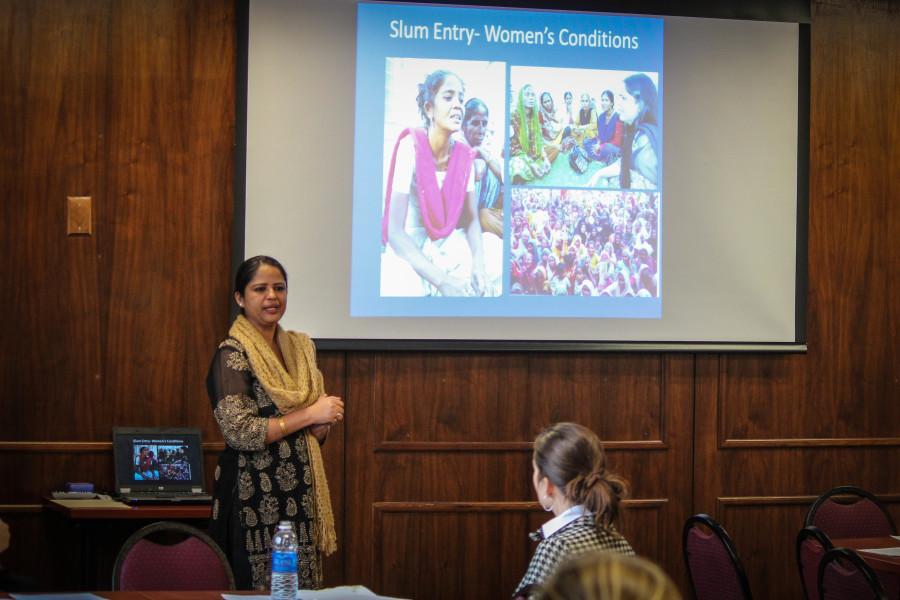 The president of an Indian women’s rights group used a campus speech yesterday to highlight women’s struggles in India and call for a more progressive legal system in the country.

Naish Hassan, the founder and president of Bharatiya Muslim Mahila Andolan, spoke to a group of about 15 in the Office of International Education program center. She was joined by Caroline Neilsen, who has worked with Hassan in India on changing women’s rights laws and improving educational opportunities for girls.

Hassan talked about her personal experiences as a Muslim woman in India. She said her work began by responding to religious fundamentalists who placed restrictions on clothing and opportunities for women. Her campaign focused on issues facing Muslim women, including educational and health care restrictions and violence against women.

“My objective was to do some good work,” Hassan said.

According to Hassan, Muslim women are often marginalized because of religious tensions between Muslims and Hindus that date back to independence from Britain and the powerful patriarchal system in India.

At first, the focus of BMMA was to give girls educational opportunities. Hassan said many parents felt education for their daughters was unnecessary because most women marry young and stay in the home. BMMA now has funding to send 100 girls to school, and many of those who graduate come back to work for the organization.

The organization’s goal is to codify the Indian legal system so that women have more recognized rights. Some Indian Muslims currently use Sharia law in family courts.

While there are multiple interpretations of Sharia law, the legal practice tends to be more conservative. Traditions such as child marriages, divorces and fatwas are prevalent, Neilsen said. She talked about halala, which permits a man to retake his wife after divorcing her; today, it has been twisted into a method of bribery in which a different man must sleep with the woman before the former husband will reclaim her.

“It’s being used as a rape tool,” Neilsen said.

Neilsen said women face more challenges in India than in other countries.

“Everything in India is very much linked to gender,” she said, pointing to the societal norms many women must overcome to do everyday tasks such as leaving the house to buy groceries.

There are many challenges to BMMA’s work both inside and outside of the Muslim community, Hassan said, noting that some men in the religious community do not support gender equality or allowing women to be educated.

Hassan said the Quran, the scripture for the Muslim faith, has room for progressive interpretations of equality.

“We are not answerable to any mullah,” she said.

Students who attended the event came in with varying knowledge of the circumstances in India but were impressed by Hassan’s speech.

“It’s incredible what she is doing,” said Asmita Ismail, a senior in the College of Arts & Sciences.

Sarah Israel, a sophomore in the College of Health Sciences, said the idea of one person stepping out and starting to challenge societal norms was amazing.

“It shows the importance of one individual willing to start a movement,” she said.