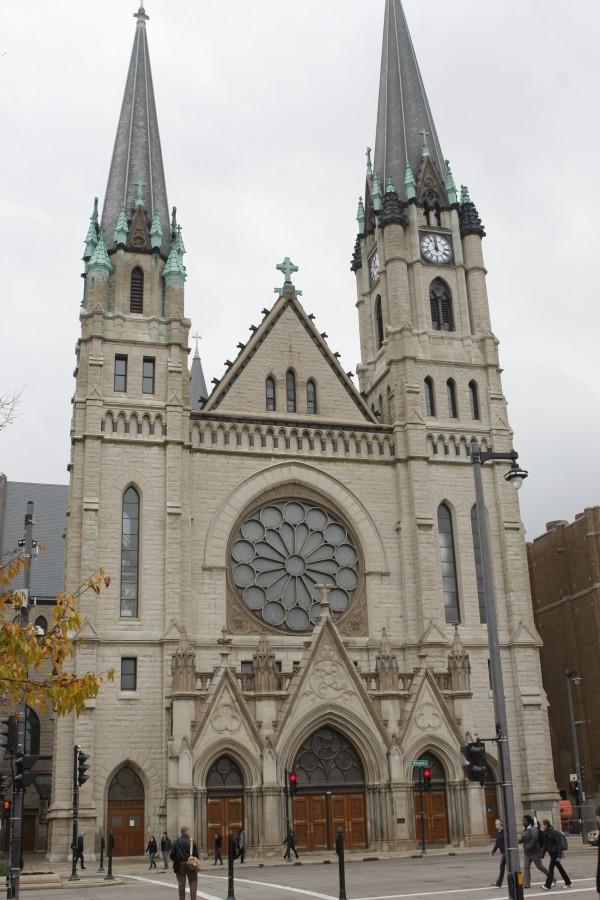 Marquette’s campus might not always seem romantic. Wisconsin Avenue this time of year is a vision of slush and bundled-up students whipped with sub-freezing winds, but with more than 15 percent of Marquette alumni currently married to another Marquette graduate, campus has been the beginning of many a love story.

While romances have blossomed in the McCormick cafeteria, on strolls to the St. Joan of Arc Chapel and at parties in basements up and down Kilbourn Ave., no place on campus has held as many romantic memories as the iconic Church of Gesu.

Ashley and Jim Packee were one of the many couples that have returned to Marquette for their wedding day last June in Gesu.

The couple first met as undergraduates on campus but didn’t start dating until the summer after they both graduated in 2007. When they ran into each other at a Milwaukee Bucks game, Jim and Ashley began to grow close out of a mutual love of Marquette and basketball.

With time, the two got engaged and immediately knew they wanted their wedding to bring them back to Marquette.

“Gesu was the only church we would have gotten married in,” Mrs. Packee said. “It was somewhere where we both went throughout college, and we became parishioners in 2007. The church has a feeling to it that you just feel at home. I think we were both so in love with Marquette that it just had to be a part of our wedding.”

Behind the beautiful, traditional Catholic ceremonies there is a team of people who work to help couples create their perfect Gesu wedding.

Michael Heimbach has been the marriage preparation coordinator at Gesu for the past nine years and he is the first person who speaks with couples in beginning the planning process that goes into a Gesu wedding.

Before each wedding, Heimbach helps couples prepare for the commitment of marriage with an engagement enrichment retreat and focus inventory with more than 150 questions on topics like values, communication, parenting and finances.

Mr. Packee remembers his preparation with Heimbach as being a helpful step before his own wedding.

“You get to learn some things about each other that you might not typically talk about on a daily basis,” Mr. Packee said. “They get pretty deep with your spirituality, and you get to spend some time away from the hustle and bustle of planning the actual wedding. You’re running around all over the place, picking up flowers, picking out a band, picking out the food, the venue for your reception. It’s a nice break from all of that to focus on what’s really important in the whole process, which is the actual ceremony and the marriage.”

Gesu is one of the most popular Catholic churches for weddings in the Milwaukee area with more than 52 weddings a year. Couples who are active parishioners, current Marquette students and Marquette alumni are eligible to get married in the church, but even with these requirements, the dates for weddings fill up quickly.

The calendar of available dates for Gesu weddings opens the first week in October of the previous year.

“I think Gesu is so popular because it really gives you that feel of a church,” said Margi Horner, who has served as the director of liturgy for six and a half years at Gesu. “You get the beautiful stained glass. You get nice organ music for your wedding. For the couples, and especially the brides, who dreamed of that kind of setting for a wedding, it is perfect.”

As the director of liturgy, Horner attends each wedding held in the church to make sure the events run smoothly. Horner also makes sure each couple’s plans fit with Gesu’s Catholic tradition.

Most of the weddings at Gesu are very traditional with all the elements of a Catholic ceremony. According to Korner, traditional choices like the “Ave Maria” and Pachelbel’s “Canon in D” are favorites at Gesu weddings.

“I swear, at this point I could probably hum the whole (“Canon in D”) to you,” Horner said. “I’ve heard it a number of times, having done weddings here for six and a half years, and doing two weddings a weekend, you get kind of familiar with that.”

This traditional Catholic ceremony is often part of the draw for couples that fell in love at Marquette and felt a connection to the University’s atmosphere.

“The Jesuit background of Gesu is something that has kind of been imprinted in me since high school,” Mr. Packee said. “Gesu is somewhat of a beacon of the Jesuit community, and it’s obviously a very beautiful church. We never really pictured ourselves getting married anywhere else.”

Beyond the religious draw, many couples are drawn to Gesu as part of a tradition of Marquette weddings that often continues even within families.

“I’m the youngest of five siblings who went to Marquette,” Mr. Packee said. “My parents both went to Marquette. My uncles went to Marquette (and) my grandparents. Marquette kind of runs in our family blood. So it was a perfect fit having the whole family there on Marquette’s campus for the biggest day of our lives, so far.”