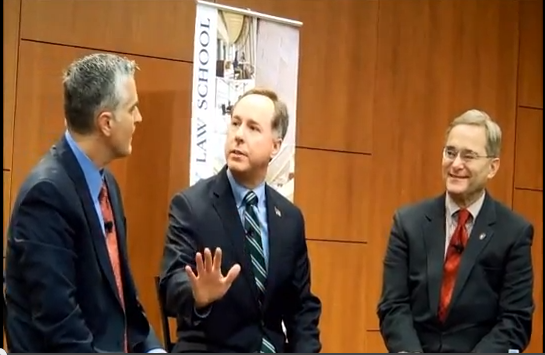 The top representatives in the Wisconsin State Assembly, Speaker Robin Vos, a Republican from Burlington, Wis. and Minority Leader Peter Barca, a Democrat from Kenosha, Wis., went “On the Issues” Wednesday to debate Governor Walker’s 2013-2015 biennial budget. The program began with the two discussing the current state of civility in the legislature, referencing the turmoil that plagued the assembly two years ago following Walker’s proposal to curb government employee unions’ collective bargaining rights.

Speaker Vos answered first, saying he believes significant changes will occur in the state. He said the John Doe case was finally over and gave credit to Gov. Walker for pursuing the case and contacting the district attorney. While some of Walker’s aides were charged with various offenses relating to embezzlement, the governor himself was not charged.

Minority Leader Barca agreed with his Republican counterpart about looking toward the future, citing the bipartisan legislation the assembly has worked on so far this year.

“Increased civility in the legislature gives confidence to the people,” Barca said “We need to set a positive example.”

The sense of agreement between the two did not last long, however, as a clear division between the two legislators arose after moderator Mike Gousha asked for their thoughts about the new tax cuts featured in Gov. Walker’s budget.

Barca said he wanted to see tax relief focused more on middle-class families rather than the across-the-board tax cut proposed by Walker in his budget. He hopes the earned income tax credit, which gives a higher tax return to lower income families, is increased even more.

Vos countered by stating that an effort is already in place to close loopholes in the tax code and to decrease payouts to special interest groups. He said he readily supports the small tax deduction and hopes that taxes can be further reduced.

“Wisconsin is a good place for lower income families to live because there is a good amount of relief given,” Vos said. “But Wisconsin ranks number four on the list of worst states to live in as a middle-class income tax payer.”

The debate continued when Gousha brought up Walker’s position on the Affordable Care Act. Walker recently said he would turn down federal funding for Medicaid and continue using the state’s BadgerCare system.

Vos said there is no longer a debate about the Affordable Care Act and that legislators must now look to the future to see how it will be implemented. However, he said he agrees with Walker’s stance and believes the private sector could provide better health care solutions than the government.

“What the Democrats seem to say is that we want more people on government funded insurance – that’s what Medicaid is,” Vos said. “I am not going to put the tax payers of Wisconsin on the hook for a program that’s unsustainable in the long run.”

Barca quickly rebutted, saying that the federal government will pay 100 percent of Medicaid payments over the next three years.

“Wisconsin tax payers are going to have to pay where the federal government would cover 100 percent of it,” Barca said.”Why would we make a decision like that?”