UWM Drag Show used its glitz for a good cause 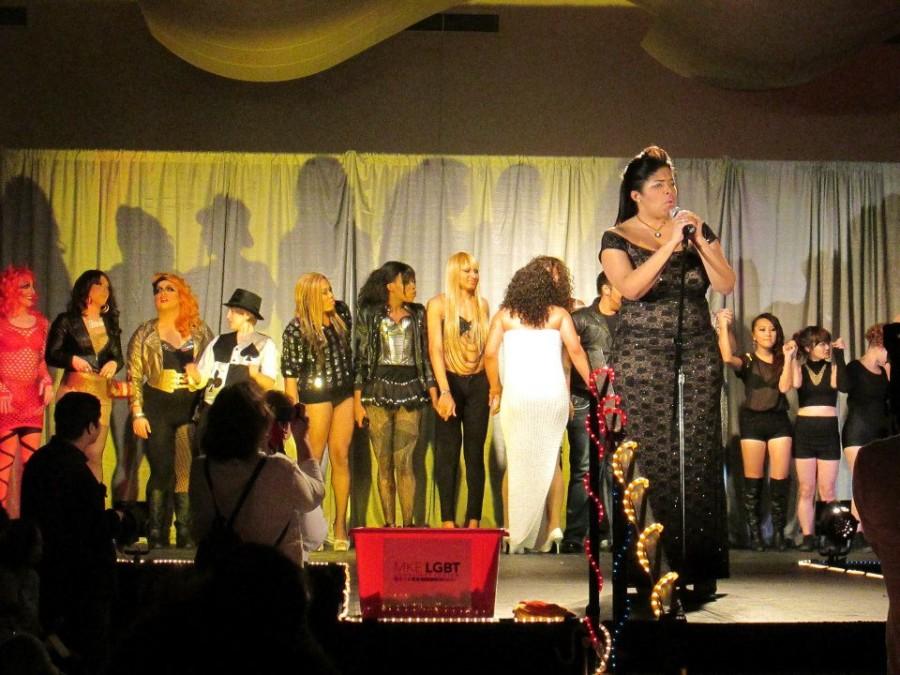 Going from Marquette to the University of Wisconsin-Milwaukee Drag Show is a bit like going from Kansas to Oz. You arrive to an overload of glitter, dancing and colors and realize you’re far, far from home.

Though this world of drama-spins, towering wigs and dangerously spiky heels seemed like somewhere over the rainbow, it was just a short bus ride from campus.

Last Saturday’s show, sponsored by the UWM LGBT Resource Center and the oStem organization (Out in Science, Technology. Engineering and Mathematics), saw scantily clad and bedazzled queens and bearded drag kings work the runway and strut through the packed crowd.

More than 900 people attended the show, filling UWM’s Union Ballroom to capacity and spilling into an extra space where people watched the event on TV.

But the night was not just glamour for glamour’s sake.

The drag show is primarily a fundraiser for Project Q, an organization that works to empower lesbian, gay, bisexual, transgender, queer, questioning and allied young people in Milwaukee. This tie to charity, as well as years of wild and entertaining shows, has made this event the largest of the year for the LGBT Resource Center and a staple in the Milwaukee LGBT community.

That popularity became clear long before any of the performers took the stage when an impressively long line wound its way through the student union.

Like most of the show, this line was far from ordinary. The mix of Milwaukeans and students – mostly from UWM but with a large group from Marquette  –  made up a crowd filling every seat and lining walls around the stage.

The audience was peppered with fashion statements nearly as bold as the performers. Groups of women sported scrawled-on beards. Men walked through the line with impressive high heels, glitter and makeup. It was an environment where gender roles began to dissolve and the wild and outrageous were the norm.

During the performance, audience members were encouraged to bring cash up to the stage to donate to Project Q, and some bolder members of the crowd handed cash directly to performers – sometimes even earning a kiss from the kings and queens.

Host Isis – whose alter ego Warren Scherer has worked with the UWM LGBT Resource Center for many years – took the role of emcee with sassy commentary that encouraged people to donate and introduced acts.

“Isis is a hilarious emcee who also educates people who attend the show,” said Nicholas Gutierrez, vice president of Marquette’s Gender and Sexuality Alliance. This is the third year Gutierrez has attended with members of the GSA, which made up a large part of this year’s Marquette presence at the show.

“This year’s show was different than years past,” Gutierrez said. “Many of the acts were performing for their first time in the UWM drag show. The past two years had fabulous performances from some of the most well-known and respected queens in the community. Other than that, the show was just as amazing.”

One of the night’s standout performances, and a favorite of Gutierrez, was the veteran queen Lady Gia. She has become a crowd favorite after years performing in the show. This year, Lady Gia performed twice, earning huge audience reactions to her graceful and daring act. She strutted in a white billowy dress to “Diamonds” by Rihanna and showed off her dance skills to a mix in the second act, featuring one of the most memorable outfits of the night – memorable mostly by how little fabric was actually involved, with just a few key areas covered.

The show marked a celebration of the UWM LGBT community that reached into many schools in the area, including Marquette, but members of Marquette’s GSA in attendance said they would like to see some aspects of the event come to Marquette as well.

“Unfortunately, I feel that there would be opposition to such (a drag show at Marquette), because there has been push back for other events, as well,” Gutierrez said. “Marquette hasn’t been at the forefront of inclusion and acceptance like the Wisconsin schools, but that doesn’t mean we have to prolong our progression.”

With a click of their heels, Marquette students can return home from the world UWM creates each year. Though Marquette has not yet been home to a show of its own, the spectacle of this yearly favorite reaches out to MU students to provide a fun glimpse into the wild world of drag.