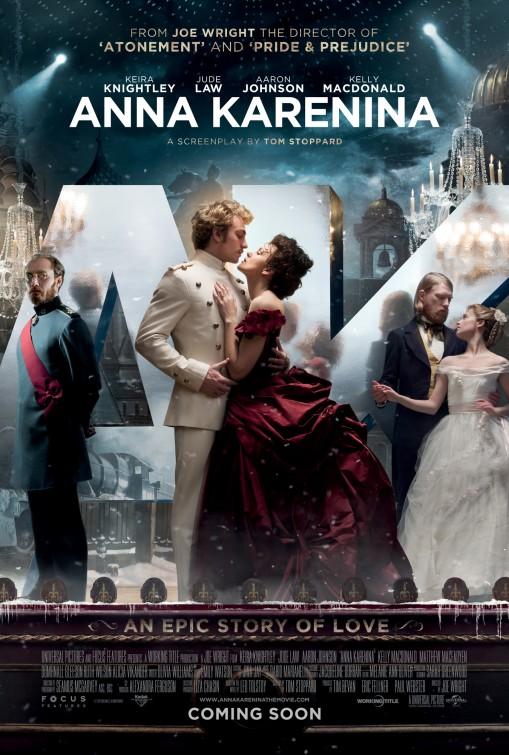 "Anna Karenina" was directed by Joe Wright, who previously adapted another classic novel, "Pride and Prejudice," for the screen. Photo via impawards.com

“Anna Karenina” was directed by Joe Wright, who previously adapted another classic novel, “Pride and Prejudice,” for the screen. Photo via impawards.com

“Anna Karenina” isn’t just the title of a long, boring book you probably didn’t read for your AP Literature class. The novel by Russian writer Leo Tolstoy, published in 1877, is thought by many to be one of the best pieces of literary fiction, and some have even gone far enough to call it “the greatest novel ever written.” It has been adapted for the big screen many times, including its latest iteration, directed by “Pride & Prejudice” and “Atonement” director Joe Wright and starring Keira Knightley, Jude Law and Aaron Taylor-Johnson.

Knightley plays the title character, a Russian noble stuck in a monotonous and loveless marriage with the Count Alexi Karenin, played by Law. Anna meets the Count Vronksy (Taylor-Johnson), and the two get romantically involved – secretly at first – but the affair eventually becomes gossip fodder, shocking 19th-century Russian society. As Anna is shunned and quietly ridiculed by society, she is torn between love and others’ expectations of her.

Instead of a traditional retelling, the film uses a theater setting to move the characters from scene to scene. Characters are frozen in place during intimate moments, and locations transition from elegant ballrooms to frosty train stations in mere seconds. At first, the brisk transitions are a bit confusing, and it takes a while to realize what is going on, but the audience gets used to being whisked from one place to another. The tactic is an obvious attempt to make the most out of the film’s running time and fit a more than 800-page romantic epic into a reasonable time frame.

The theater element works well, and it creates some breathtakingly gorgeous moments. The warm colors and the way characters’ simple movements are choreographed – as well as motifs like a recurring train, which holds narrative significance – make “Anna Karenina” a very pretty movie. In addition, the set and costume design are spectacular. As Anna, Knightley has a typically gorgeous wardrobe, and she wears spectacular outfits and dresses throughout the entire film. Even when she’s breaking down, she manages to look amazing and elegant.

It’s not just looks, though. Knightley is able to capture the emotion of a woman torn, forced to choose between her regal standing in society and the life she’s always known or the entrancing sensation of feeling loved and wanted. As the cuckolded Count, Law is stoic and cold, yet his pain and the difficult position in which he has been put can be deeply felt. Unfortunately, the same can’t be said for Taylor-Johnson, whose expressions and delivery don’t seem to match the passion and desperation his words are carrying.

But as “Anna Karenina” chugs forward with all of its switching back and forth between scenes, some of the emotion is lost. Even the beginning of the affair between Anna and Count Vronsky seems a bit rushed and thrown together. It didn’t help that the film’s second half becomes significantly slower and less visually vibrant. You’ll end up wishing you had some SparkNotes to get through Anna’s incessant paranoia and whining, which drag endlessly until it all ends abruptly and unsatisfyingly.

With its talented cast, “Anna Karenina” had the potential to be an amazing film based on Tolstoy’s classic tale of adultery, love, loss and sacrifice. Instead, it focuses on being very pretty and skims over the important emotions, leaving the audience wanting more depth and interaction and fewer perfectly choreographed ballroom dances.