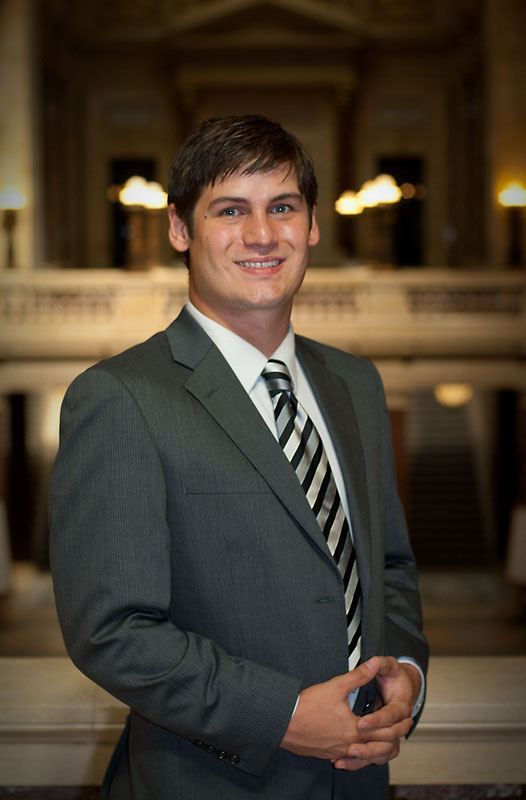 As the election is now two weeks passed, most stories out of Madison are focusing on the Republican control of both houses in the state legislature, with some focus on Rep. Robin Vos (R) being elected speaker of the assembly and Rep. Brett Hulsey (D) nominating himself as minority leader, despite Peter Barca (D) retaining that position.

Someone who is missing from the headlines is Jonathan Dedering, a 26-year-old Madison political organizer and activist who challenged Hulsey in the 78th Assembly district race and gained 24.3 percent of the vote. Dedering may have lost as a distant second, but his result was a huge step forward for the Green Party.

“I think that the Green Party better represents the positions that we should begin to adopt moving forward in this century,” Dedering said. “The Democratic Party is no different from the Republicans in their corruption and, more or less, they operate to disguise each other.”

Though relatively young, Dedering has been involved in progressive causes since high school, rallying against things such as the Patriot Act and the war in Iraq while fighting for same-sex marriage and environmental protection.

As he was building up a resume with the left-leaning community by organizing with groups like Students for a Democratic Society, the Campus Antiwar Network and the Autonomous Solidarity Organization, he never fell in love with the Democratic Party’s platform, citing what he called its inability to keep up with the progressive movement.

“Generally, the Democrats tend to lack in the timeliness of updating their platform,” Dedering said. “For example, until earlier this year Democrats had not officially supported same-sex marriage rights.”

“Two major issues I would like to see the Democrats take more seriously are GMO (Genetically Modified Organisms) regulations and the development of major solar infrastructure,” he continued. “I also believe that we should legalize hemp production to stimulate manufacturing of the countless consumer products that it is regularly used for.”

Dedering said that even though he did not win the race or come close to making Hulsey sweat on election night, the portion of the vote he received is still significant. Only Libertarians Terry Gray in the 48th Assembly District and Melba-Morris Page in the 18th Assembly District, and Independent Anthony Edwards in the 3rd Assembly District, also received double-digit support as third parties in Wisconsin, but none matched Dedering’s total or even eclipsed 20 percent in their respective races.

“I am happy with the showing,” Dedering said. “I plan to run again in 2014 with a campaign strategy that will garner more early support and better endorsements. I now have funds set aside for an early start in 2014, which was not the case in this race.”

“In the meantime, I’ll be managing another progressive candidate’s aldermanic campaign and may also be directing a PAC to defeat Gov. Walker in 2014.”

The Greens had no candidate running against Scott Walker for governor in 2010, and their history in Wisconsin has shown mixed results. In 1986, Frank Koehn was elected to the Bayfield County Board of Supervisors, becoming not only the first Green to win election in Wisconsin but the first in the U.S. They did not, however, gain ballot access in Wisconsin for president until 1996, when Ralph Nader received 28,723 votes, more than the 1 percent threshold used to determine recognition by the State Elections Board.

Green Party state treasurer candidate Jeff Peterson maintained that ballot access in 1998 by getting more than 30,000 votes, allowing Nader to run again in the state and attain almost four times his earlier vote total in 2000, with 93,553 Wisconsinites casting their ballots for him. In 2006, the Green Party ran its first candidate for U.S. Senate, Rae Vogeler, in a losing effort against incumbent Herb Kohl (D), along with 17 other candidates for local office, with a record high 22 Greens holding local office in both 2006 and 2007.

Currently, just 11 Greens hold office in Wisconsin, none of whom hold office statewide or in the legislature. Moreover, only one Green, Fredrick Smith of Alaska, holds any state legislature position in the entire country, and only one other Green, Gayle McLaughlin of Richmond, Calif., currently holds office as a mayor.

Physician and 2012 Green Party presidential nominee Jill Stein did not make advancements for the party either, as her 434,000-vote total came nowhere near Ralph Nader’s multimillion-vote campaign in 2000. Most progressives ended up voting for President Barack Obama, but Dedering is still confident that the Green Party can tap into that segment of voters and grab support away from the Democratic Party.

“I think the Democrats are slow and weak,” Dedering said. “They still hold major support because they’re positioned as the wise old man, but their time to pass the torch is quickly nearing.”

As Dedering continues to work toward that goal, he also notes that his candidacy, both the one that just ended and his prospective 2014 run, is a stand against the two party system in general.

“I wanted to challenge the party system as a whole,” he said.