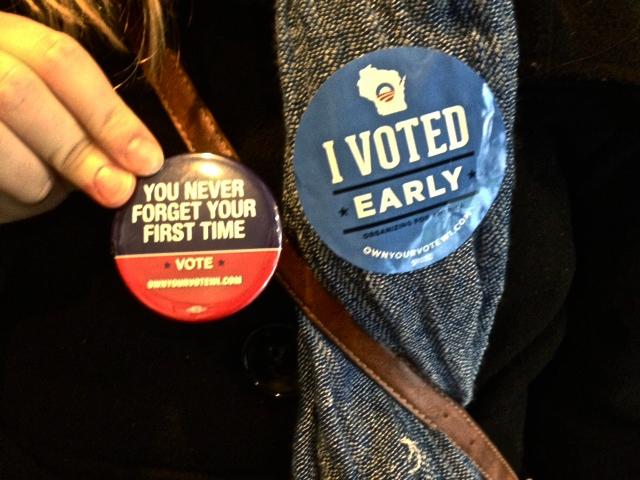 Marquette students who voted in Wisconsin Tuesday not only got to feel the excitement of casting their presidential ballots but also got to vote in a major swing state.

Katie Mills, a first-year law student, voted in Milwaukee this year. In 2008, she voted in Madison while she was an undergraduate at the University of Wisconsin-Madison.

Mills said she hopes to see the same turnout of young voters this year but was not sure if that would happen.

“There was such a strong movement (in 2008),” Mills said. “I haven’t seen that same effort this year. (Voting) is one of the only ways to be heard,” Mills said.

Any eligible voter in the U.S. can vote in Wisconsin by showing proof of residency, such as a piece of mail with her or his name and address.

Tatum Matlock, a junior in the College of Arts & Sciences, went to the polls in Milwaukee even though she calls Michigan home.

“I wanted to vote in a swing state,” Matlock said. “Michigan will vote the way I would, so I wanted my vote to count more.”

Maggie McClain, a senior in the College of Arts & Sciences, voted in Milwaukee instead of her hometown in Illinois.

“My vote counts more here,” McClain said. “Illinois is pretty much locked up. Since the last election, there have been dramatic changes in both parties. I know where both parties are heading, and I know where I want to put my vote.”

Shana Sigmund, a sophomore in the College of Health Sciences, also voted in Milwaukee instead of her home state of Illinois. Sigmund said she couldn’t go home to vote, so she voted in the AMU yesterday.

“It took about 15 minutes, and I wasn’t even registered,” Sigmund said. “As a first-time voter, I was really excited. It felt good to vote.”

Kelly Taylor, a sophomore in the College of Business Administration, said she voted in the AMU because “it was more convenient.”

David Fabris, a sophomore in the College of Health Sciences, voted in Milwaukee rather than in Illinois because he lives here. He watched all three of the presidential debates, which he said influenced his vote.

“I feel like, being on a college campus, you see a lot more (political) action,” Fabris said.

Eric Thompson, a senior in the College of Communication, voted in Milwaukee even though his family resides in Racine. Thompson said voting in Milwaukee is more convenient.

Thompson said he thinks the youth voter turnout will increase again this year.

“With social media booming, (the election) is all over TV and Twitter,” Thompson said. “This campaign is a lot closer (than in 2008), so there will be a lot larger of a turnout. Young people really want to have their voices heard.”

Brogan O’Brien, a freshman in the College of Business Administration, voted absentee in Nebraska.

“I wish I would have voted here because (Wisconsin) is more of a swing state,” O’Brien said.

He said he was eager to vote in his first presidential election.

“It’s actually affecting me now, and I understand (politics) a lot more than when I was younger,” O’Brien said.

According to a study performed by the Higher Education Research Institute at UCLA, young people with at least some college experience were almost twice as likely to vote as those who had never been to college, 62.1 to 35.9 percent.

Students who are attending college outside their home states are allowed to vote by absentee ballot in every state and the District of Columbia.

Randy Neu, a junior in the College of Engineering, voted absentee in Racine County.

“I wanted to vote where I actually live, not just where I go to school,” Neu said. He also voted in the recall and midterm elections in Racine.

Neu said the negativity of the election this year will keep younger voters away from the polls.

“Enthusiasm will drive action, and that isn’t what we have this year,” Neu said.

Brennan Abrahamson, a junior in the College of Arts & Sciences, said he went home to vote in Waukesha, Wis.

“This is my first chance to vote in a presidential election, and I want to vote,” Abrahamson said. “It is amazing that every four years we have this peaceful way of exchanging power.”

Tessa Danielson, a freshman in the College of Communication, voted absentee in her home state of Minnesota. She made the decision because of two particular amendments on the ballot —  the definition of marriage and voter ID.

“I really wanted to vote and wanted to have my say in (the election),” Danielson said.

Studies have shown that people who are more educated have higher rates of political participation. Despite this, voting behavior among students in college is unpredictable.

According to a 2012 survey by the Institute of Politics at Harvard University, 67 percent of 18- to 29-year-olds said they were registered to vote, and 25 percent considered themselves to be politically engaged or active.

In October, nine percent of likely voters were still undecided when asked for whom they would vote if the presidential election was held that day.

When asked why they would not vote, 43 percent of respondents said Washington is broken and that it does not matter who is elected. Other popular responses were that none of the candidates represent her or his own views and that the parties are more or less the same.

Lindsey Gosh, a sophomore in the College of Nursing, was undecided if she would vote in the election.

“I’m kind of confused,” Gosh said. “On television, you just hear the candidates going back and forth. I have to do more research.”

Tori Erickson, a freshman in the College of Nursing, said she did not vote in the election.

“I haven’t registered, and I don’t know anything about politics,” Erickson said.

She thinks young people do not vote because they do not think that their vote will matter. Erickson said she plans to vote once she gets older.

“When I have my own job, I will be more inclined to vote,” she said. “Then, (the results) will affect me more.”