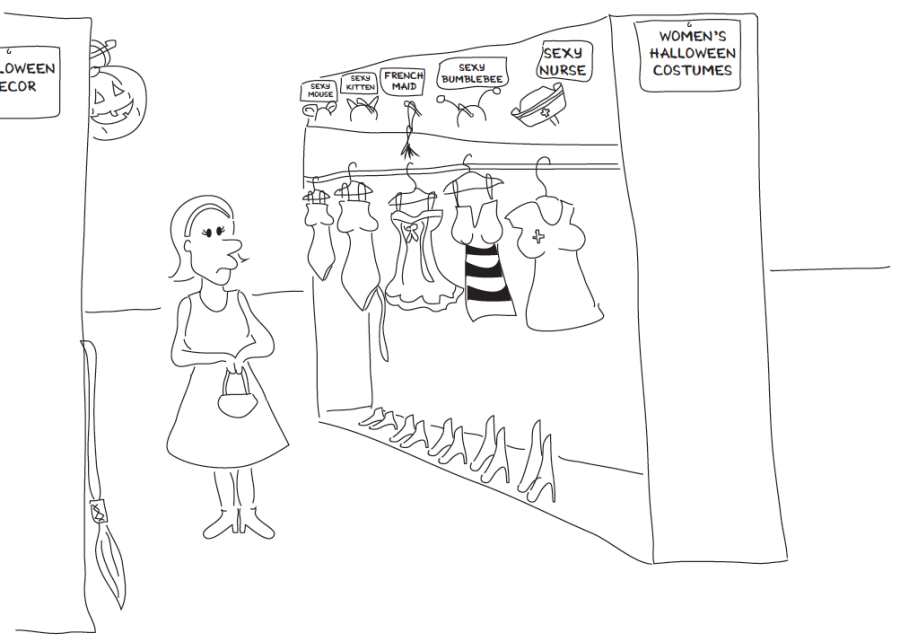 Halloween weekend is upon us. The big question is, what will you dress up as?

In any of today’s pop-up Halloween stores, one can find a whole wall of options for men. From superheroes to doctors, monsters to movie stars, the costume possibilities are endless (especially if you make your own costume). But for women, the options beyond sexy fill-in-the-blank are few and far between.

Besides the fact of the blatant sexual exploitation of women on this holiday, the real question is, how did all this sex appeal get thrown into Halloween? And perhaps on a more practical note, don’t people realize Halloween in Wisconsin is normally between 30 and 40 degrees?

The Jesuit educational principle “cura personalis” means care for the whole person, not uncover the whole person. We are not trying to be your parents telling you to cover up, but we – your friends and peers – ask our fellow Marquette students to think about your costume choices this weekend and what your choices say about you and about us as a student body. After all, we are Marquette on weekends and holidays, too, not just in classes and at basketball games.

This call for weather-appropriate clothing is not just directed at women. We have seen one loincloth too many on some of you men out there.

According to the History Channel’s website, Halloween originated as a tradition by the Celts to mark the end of the harvest and beginning of their new year, Nov. 1. The new year marked the beginning of winter, a time of death. The Celts believed that the night before the new year, Oct. 31, they could communicate with the dead because boundaries between the living and the dead could be broken. The Celts built sacred bonfires and offered sacrifices such as crops and animals to their gods.

“During the celebration, the Celts wore costumes, typically consisting of animal heads and skins, and attempted to tell each other’s fortunes,” according to the History Channel.

Chances are, this finding makes your costume a bit more than nontraditional.

To quote Mean Girls, “In the regular world, Halloween is when children dress up in costumes and beg for candy. In Girl World, Halloween is the one night a year when a girl can dress like a total slut and no other girls can say anything about it.”

Why isn’t Cady Heron’s “Ex-Wife” costume more of the norm? It takes a lot more originality to be scary than to wear “some form of lingerie and animal ears.”

We laugh at the Halloween scene in Mean Girls because it rings all too true. The college version of Halloween is much different than this holiday’s original meaning.

This is not all college students’ choice, though. After all, Halloween stores and society push the (lack of) clothing options of the majority of women’s costumes and perpetuate their popularity. There needs to be more options.

Students who decide to go beyond the realm of predictably sultry costumes are hard to find on college campuses, but every once in a while, someone stands out. Strive to be the person wearing the most creative costume this year, not the person showing the most skin.

After all, Halloween is supposed to be scary, not sexy. The only reason you shouldn’t be wearing pants on All Hallow’s Eve is because they were scared off by someone else’s awesome costume.