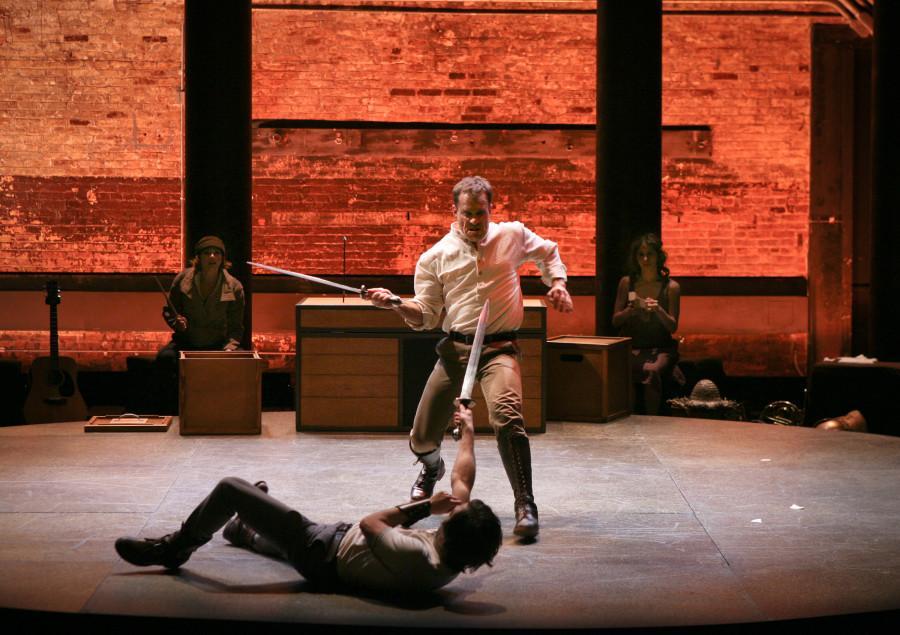 "Cymbeline" is one of the Bard's most complex plays, both in staging and storytelling. Photo courtesy of Ari Mintz.

Shakespeare’s “Cymbeline” is not for the faint-hearted performer. The play’s sweeping adventure and grand scale is infamous for its theatrical challenges. The show calls for a whopping 21 characters, a move across continents, quick-fired plot twists and the appearance of a headless body on stage. It’s a daunting task to be sure. Faced with these problems, playwright George Bernard Shaw famously called the show “exasperating beyond all tolerance.”

But the Fiasco Theatre is up for the challenge. The company’s six actors prove that when done right, “Cymbeline” emerges as a tale rich with the Bard’s signature flair for life’s strongest passions: love, war and revenge. The New York Times’ theatre critic Ben Brantley praised the achievement, calling Fiasco’s “Cymbeline” “the clearest and most truly enchanting I’ve ever seen.”

As artists in residence at Marquette, the Fiasco Company will bring this rare accomplishment to the Helfaer Theatre, performing a free dress rehearsal open to all Marquette students tonight before its shows for the public this Friday and Saturday evening.

Jessie Austrian, co-artistic director for the Fiasco Theatre and actor in “Cymbeline,” described the show as an entertaining production that incorporates live music, fight scenes and creative staging.

“(‘Cymbeline’) has a lot of variety and a wide appeal to people of all ages and backgrounds,” Austrian said. “It’s a really fun, dynamic, actor-driven show.”

“Cymbeline” primarily follows a love affair between Imogen, the daughter of the Celtic king Cymbeline, and Posthumus Leonatus, a man of honor that marries Imogen unbeknownst to the king. In true Shakespearean style, their love is challenged by twists of fate and tragic acts bringing together many of Shakespeare’s signature moves. There are star-crossed lovers, mistaken identities, plotting queens, cross-dressing women and battles for revenge.

Though the full breadth of the story can overwhelm, simplicity is key to the Fiasco company’s success. Six actors, including Marquette alumnus Andy Grotelueschen, take on the show’s 21 roles using minimal costumes and props. The set remains sparse with only two crates, a sheet and a “magical” trunk. Without the extra flash, the company trusts the power of the performances and Shakespeare’s immortal words to do the work.

“We feel the magic of theatre is engaging the audience’s imagination,” Austrian said. “It’s more exciting for the audience to fill in the gaps with their own imagination rather than providing everything in a physical way.”

Austrian admitted that the play can often be problematic, but she thinks the company thrives on finding solutions.

“If you embrace the problems, there are really fun intentional moments Shakespeare has made,” Austrian said. “We are always asking ourselves what Shakespeare was trying to offer and trust that he knew what he was doing.”

The company is particularly proud of its take on the play’s notoriously difficult-to-stage beheading scene.  “I don’t want to give too much away, but we came up with a way that we do it on stage which is a really fun moment for us to do and for audiences to see,” Austrian said.

Bringing this highly acclaimed group to campus is a rare and exciting opportunity for Marquette Theatre. The company, which was formed in 2007, consists of a self-assembled group of six actors who met attending Brown University. It has had previous residencies at Duke University and at The Gallatin School at New York University. The residency at Marquette involves three aspects for the company: performing “Cymbeline,” teaching in Marquette theatre courses and workshopping a new play entitled “The Vexed Question.”

A staged reading of the new show was featured as part of Marquette’s Freedom Project, a year-long commemoration of the 150th anniversary of the Civil War. “The Vexed Question,” written by company member Noah Brody, follows John Quincy Adams in his late-in-life congressional fight for the abolition of slavery.

“It’s a really exciting period in our history that most Americans have no idea about,” Austrian said. “John Quincy Adams is a sort of forgotten figure in our history, but he was instrumental in allowing the debate to happen over slavery and abolition.”

With this promising future and its fresh take on one of the theatre’s oldest conundrums, you will not want to miss the company’s final shows. The Fiasco Theatre members have brought their artistic originality to campus, but after this weekend, they will move on to new projects, taking them as far as California and New Jersey. They are bound to continue to create great work, leaving Marquette Theatre all the richer in their wake.