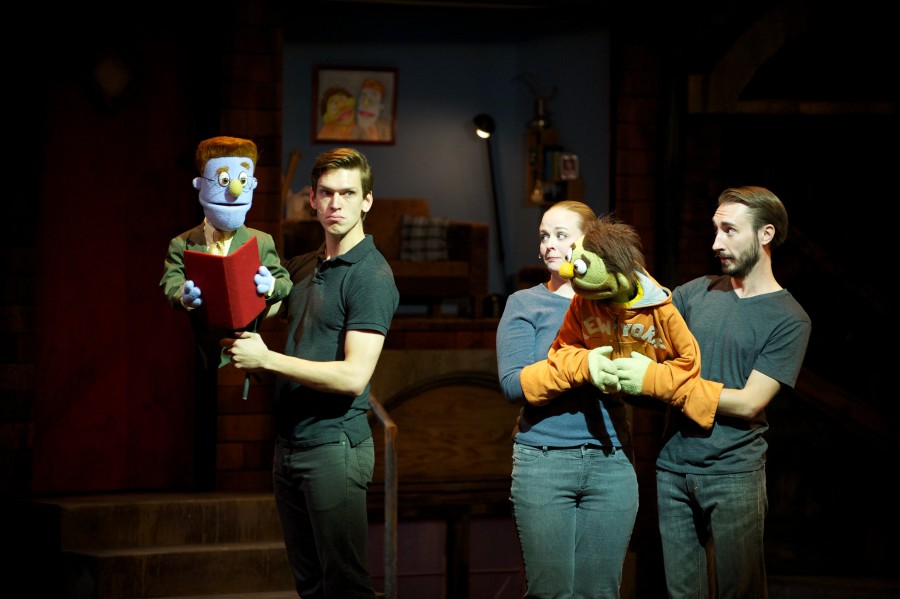 Roommates Rod and Nicky are just two of the puppet characters in "Avenue Q," the latest musical to hit the Skylight Music Theatre. Photo courtesy of Mark Frohna.

The raunchy yet warmhearted “Sesame Street for Adults” tells the story of Princeton, a recent college graduate who struggles with finding purpose in life after moving to Avenue Q, a rough neighborhood on the fringes of New York City. He lives in a rundown apartment complex with some unlikely neighbors, including Gary Coleman – one of the musical’s few human characters. Throughout the show, he builds relationships with the block’s inhabitants as they search for jobs, love and their purpose in life.

The wildly entertaining musical stands out for two reasons: the dialogue and the lyrics. Both are comical and adult-orientated, making this show to be “R-rated” in the theatrical sense. No one under the age of seventeen is advised to see the “Avenue Q” due to sexually explicit material, full puppet nudity, puppet sex and the show’s tendency to let the expletives fly.

Themes of pornography, homosexuality and racism are all referenced in the musical, albeit not in an exploitative way. The characters are adjusting to the real world, and these elements exist in the modern universe the show explores.

The ideas are not solely used for comic relief, nor are they present just for the sake of having controversial aspects in the play. Rather, these themes play a very important role in the show. The musical doesn’t demonize any of these issues, but rather uses them to create relatable situations.

“Avenue Q” does not succeed solely because of the edgy content. The musical also stands out because of its uncommon medium for theatre: puppets. The felt creations, used in conjunction with human actors, are voiced and controlled by dual actors/puppeteers. These puppeteers remain unconcealed onstage but serve almost as ghosts. They are meant to be ignored by the audience as they are by the characters onstage. Throughout the play, the puppeteers replace each other during a scene, transitions that are so seamless I found myself noticing the first one only after a few minutes had passed.

The acting in “Avenue Q” is impeccable. Kate McCann effortlessly switches between sweet Kate Monster and Lucy the Slut, while Jason Jacoby and Alison Mary Forbes comedically shine as the rowdy Bad Idea Bears. Maya Naff perfectly plays to the Asian stereotype embodied in the character Christmas Eve, and Rick Pendzich picks up a few solid laughs as her submissive husband Brian. Ben Durocher adds heart to both Princeton and Rod, while Tiffany Yvonne Cox rounds out the principle visible cast as the child star Gary Coleman (yes, Gary Coleman is portrayed by a woman).

“Sesame Street” teaches children that happy endings always follow uncomplicated dilemmas, like being rewarded for telling the truth. “Avenue Q” spins this around, portraying the world as not so forgiving. It’s a world where pleasant outcomes are not always guaranteed from hard decisions. The musical uses ironic humor to tear this romantic view of “Sesame Street” down and replace it with a more realistic, problem-ridden view of the world.