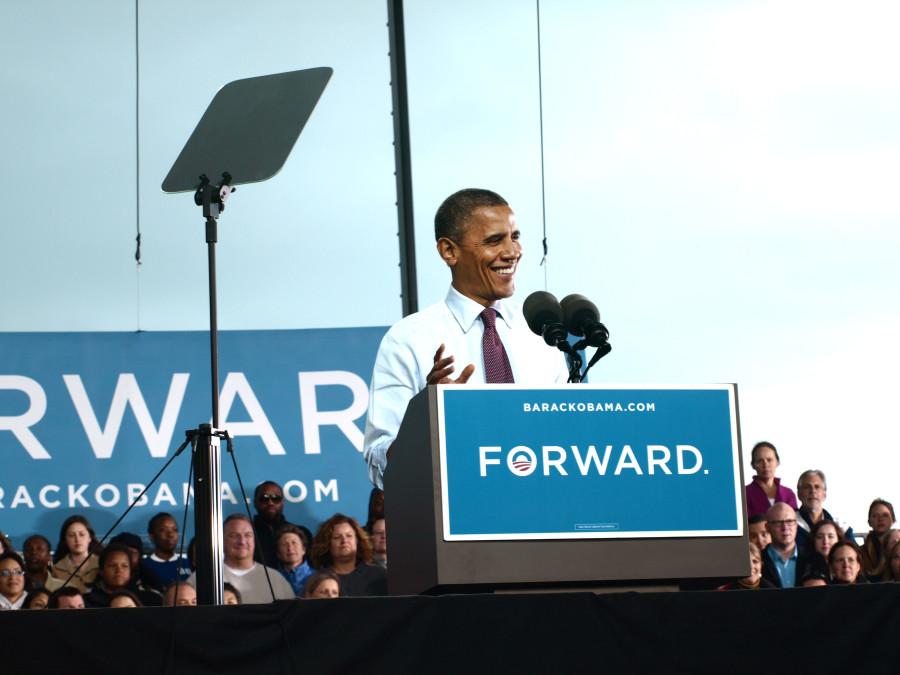 President Barack Obama held a rally today for thousands of supporters in the rain at Milwaukee’s Summerfest grounds, continuing his campaign efforts in what many experts call a pivotal swing state.

Obama used the majority of his stump speech to hammer home policy initiatives, including investments in alternative energy and increased taxes on Americans making more than $250,000, all while slamming his opponents, Gov. Mitt Romney and Rep. Paul Ryan for what he called a “you’re on your own” philosophy.

The latest Marquette Law School poll, released Wednesday, showed Obama leading Romney in Wisconsin by a 54 to 40 margin. Other polls depicted a closer race but still showed the president with the edge in Wisconsin.

Obama also mentioned the recent attacks in Libya, vowing to bring justice to those who killed U.S. Ambassador Chris Stevens.

The president took the last few minutes to urge supporters to do everything they can to help his reelection bid, including making phone calls, going door to door and simply telling others to vote.

“We can create a million new manufacturing jobs over the next four years, but it requires you to vote,” Obama said as the rain picked up.

The Marquette College Democrats, who had been handing out tickets to the event this week, tweeted before the rally that 900 Marquette students would be attending.

Looks like its already packed for #obama :/Monique Collins
Just ran by some secret service on my way to the lake. The #POTUS is in town. #Obama2012Melanie Lawder
Waiting in line for Pres. Obama’s speech – doors open in one hour. http://instagr.am/p/P404FzHKKU/MU Tribune Photo
900 @MarquetteU students are at the @BarackObama rally today. There’s your youth enthusiasm gap.Marquette Democrats
Follow @mutribune_news and @mutribune_photo for live updates of Pres. Obama’s speech! Doors open in a half hour.Marquette Tribune
The line at this @BarackObama rally is unreal right now. #POTUS #MKEMelanie Lawder
Just got interviewed by a reporter from WBEZ 91.5. What does the American Dream mean to you? #obamaMKEMonique Collins
About to see @BarackObama speak in Milwaukee. No biggie. #potusBen Greene
There’s a full house here at summerfest. Lots of people awaiting @barackobama. #obamaMKEMU Tribune News
Waiting for POTUS to speak… #ObamaMKE http://instagr.am/p/P5DTW3HKIQ/MU Tribune Photo
Atmosphere is electric as everyone waits excitedly for @BarackObama to take the stage. #ObamaMKEBen Greene
And @BarackObama takes the stage! #ObamaMKE http://pic.twitter.com/uehiFty3Ben Greene
President Obama in Milwaukee, WI: "We are not Bears fans first or Packers fans first. We are Americans first."Obama 2012
I JUST SHOOK OBAMA’S RIGHT HANDAstead Wesley
Obama, before crowd of 18,000 in Milwaukee, says change takes more than a single term in White House: http://apne.ws/QLCbpw -RJJThe Associated Press
Hope everyone had an amazing time at the Obama rally today! http://pic.twitter.com/UuMlXB7EMarquette Democrats
A packed house for President Obama in Milwaukee tonight: http://instagr.am/p/P5mN6JmuT0/Barack Obama
Delete Image
Align Left
Align Center
Align Right
Align Left
Align Center
Delete Heading