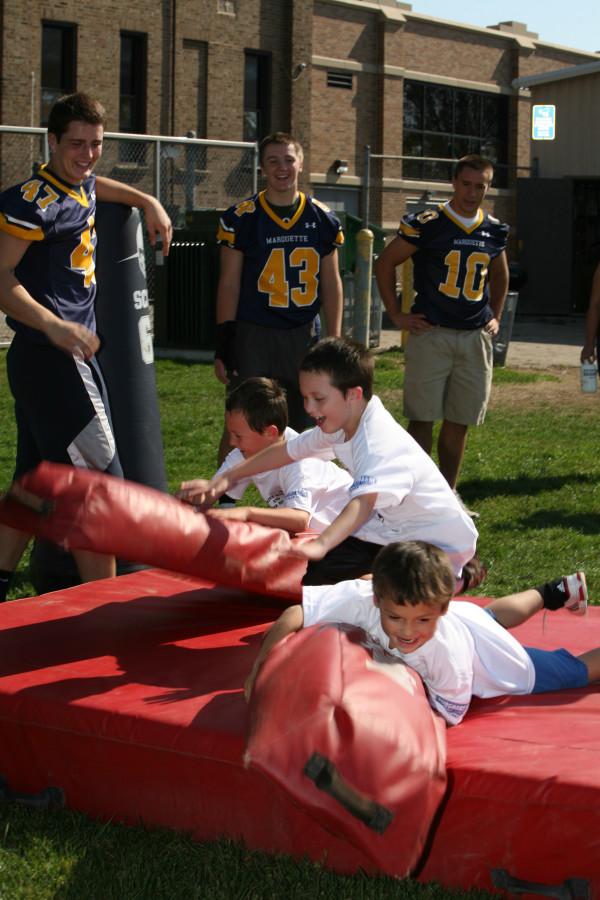 Autism, a disorder that is characterized by a range of communicative, social and behavioral impairments, is reported to affect one out of every 88 individuals — individuals that the nonprofit group Easter Seals of Southeast Wisconsin will now be giving a chance to learn to play football at Marquette University High School this Sunday.

Tyler Krueger, a Marquette University High School alumnus and former football player for the Hilltoppers, started the program along with Nicole Berlowski, the autism coordinator for Easter Seals, and now helps coordinate the program.

“The main reason we did this was because for someone who has autism, opportunities like this aren’t always there,” Krueger said.

Berlowski said she hopes this year’s clinic will bring more individuals and families dealing with autism into the community and give children with the disorder a chance to take part in the group activities.

“It’s nice to see the children having fun out on the field, when a lot of them wouldn’t have an opportunity like that,” Berlowski said. “It’s also great seeing the siblings and families take part with them.”

“We teach the kids everything,” he said. “We teach them drills, we teach them how to catch and throw, we even let them try on the uniforms and take pictures.”

Staff members from Easter Seals’s autism behavioral team will be available for additional support for the children who have a difficult time with the drills or the instructions, Berlowski said.

“As important as football was in my development, I thought it would be important for these kids to have that same opportunity,” Krueger said.

In addition to the autism behavioral team’s efforts, Krueger said he has met with the Hilltoppers and coaches in order to teach them about autism’s many symptoms and how to interact with those who display them.

According to Mazurczak, several members from the varsity team and the Junior Hilltoppers, who are in sixth and seventh grades, will help the children with drills.

“Everyone wants to participate,” he said. “I had more varsity players who wanted to volunteer than I could handle.”

Mazurczak said the team’s involvement with Easter Seals is a wonderful opportunity for the Hilltoppers.

“The media makes it seem like teens are so self-centered,” Mazurczak said. “This allows us, as a program and team, to prove just the opposite.”

“When they get to see the kids in action, it breaks down a lot of potential stereotypes,” he said. “It helps them understand that these are just kids who want to have fun.”