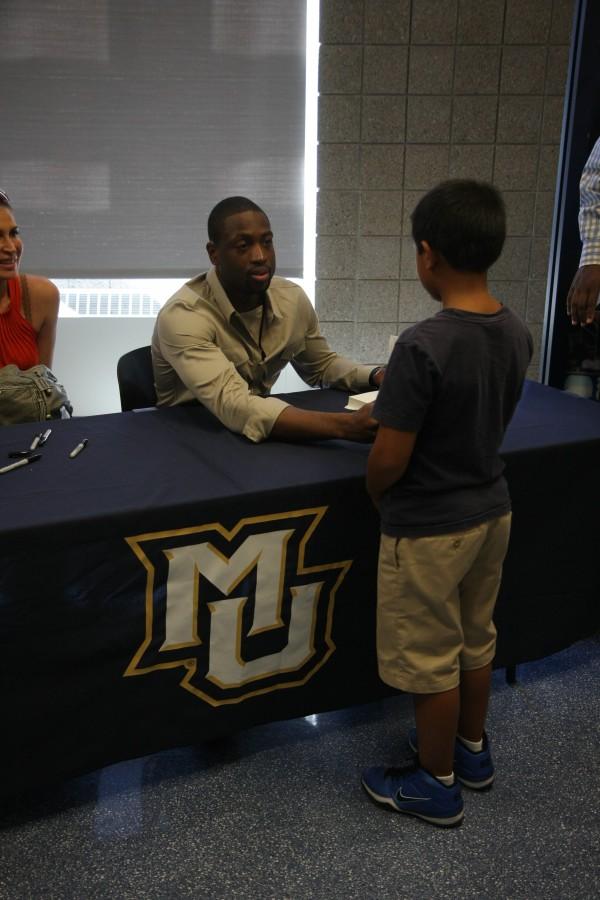 After winning his second NBA championship with the Miami Heat, Dwyane Wade bares all in his effortlessly inspiring memoir.

In “A Father First: How My Life Became Bigger Than Basketball,” Wade, with the help of co-writer Mim Eichler Rivas, recounts his journey from childhood in the drug culture of the south side of Chicago to his successful custody battle against ex-wife and high school sweetheart Siohvaughn Funches. Throughout the narrative, Wade  intertwines stories of his rise to fame with the aftermath of his divorce and subsequent custody battle for his two sons, Zaire and Zion.

The prologue describes the moment when Wade’s attorney delivered the news that Wade received full custody of his sons. The story then alternates between reflections on Wade’s own childhood and the joys and tribulations of being a father today.

Wade narrates his troubled upbringing in Chicago, dealing with a mother addicted to drugs and the daily fear of drug raids by the police in his apartment complex. Wade finds comfort in his grandmother, who he claims was his first teacher in life. Wade attributes the majority of his wisdom to this grandmother, wisdom he employs as a father to his own sons.

The memoir describes Wade’s sister, Tragil, as a role model. She guided Wade out of harm’s way when he was young and went as far as to leave him at their father and stepmother’s house, where he was raised in better, if not outstanding conditions. Wade’s dad, his first basketball coach, fostered his love of the sport, coaching him throughout elementary and middle school. He eventually predicted Wade could be as good as Demetrius, his basketball superstar stepbrother.

Wade flourished during his time at Marquette. After being redshirted freshman year due to poor grades and low ACT scores, Wade became the star of the team, leaving the university after three years to be drafted fifth overall in the 2003 NBA draft.

After what seemed a dream come true, winning the 2006 NBA championship with the Heat, Wade tells of getting faced with a custody battle from Funches, his ex-wife at the time. He recounts how this battle was both good and bad for the family. Wade claims to have at last found stability for his boys but Funches alleged adultery and abuse.

Wade and his co-author are master storytellers, evoking real emotion while not searching for sympathy. They tell Wade’s story in an effort to help others learn from his struggles.

The tone of the book is comforting and natural. For the audience, the book reads as if  Wade is personally giving an account of his life standing five feet in front of them.

While this story is a memoir of his life, the ultimate message is about fatherhood. At times, Wade speaks directly to the audience, giving advice about being a father. Perhaps the most valuable lesson Wade conveys in his work is to stop the cycle of “babies having babies.” Before having his first child, Wade wanted to end the stereotype of “fathers who bring children into the world, and then aren’t there to raise them.”

Through his reflections, Wade successfully combats this stereotype, describing why he is not that type of  father, but rather, one to be admired. The most successful element of the book is that his lessons are genuine, not demanding.

In the text, Wade skillfully expresses how a strong faith, good work ethic, fatherhood and a resilient heart are able to lift anyone from rough beginnings to success in life, using his own life as a testament to this philosophy. It should be a must-read for Wade fans, as this book casts light on the personal struggles and triumphs of his life. It is also valuable for all fathers, however, who will undoubtedly gain new insight from his reflections.