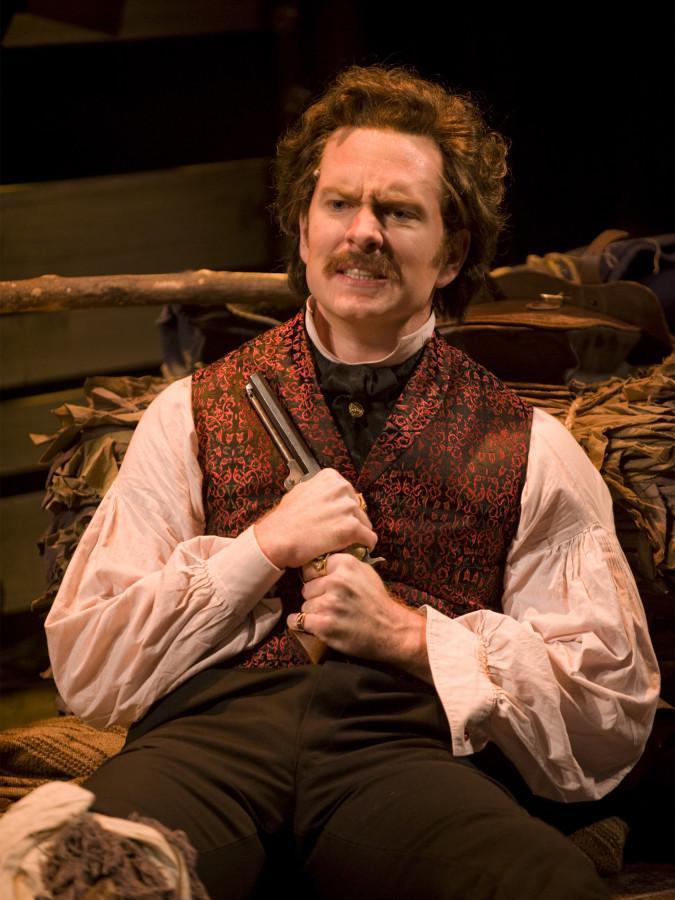 Adam Monley plays John Wilkes Booth, just one of the many assassins portrayed in the Rep's latest musical. Photo courtesy of Cindy Moran.

Adam Monley plays John Wilkes Booth, just one of the many assassins portrayed in the Rep’s latest musical. Photo courtesy of Cindy Moran.

Behind every assassination is the person who pulled the trigger.

Stephen Sondheim’s “Assassins,” the latest musical to open at the Milwaukee Repertory Theater, is the story behind some of those people. It explores the lives of eight men and women who have either killed or attempted to kill an American president.

The show, originally an Off-Broadway play that later went on to win five Tony Awards when it opened on Broadway in 2004, dedicates little time to the actual assassinations. It instead focuses on the backstory of each killer to examine the motivations behind such horrendous acts.

The set, an abandoned fairground, sets the tone for the rest of the musical. The desolate festival background is littered with broken clown faces and pictures of the presidents with the words “Hit” or “Miss” that flash depending on whose turn it is.

The carnival’s main element is a carousel that rotates to give each character a turn telling her or his story. All of the characters have enough time individually so the audience can begin to understand the reasons for their treasonous actions, but not so much that a single character becomes the main protagonist. Each of the killers is thrown out of the spotlight as quickly as he or she was thrown in.

The story and musical numbers are solid, but it is the cast that brings it all together. The actors are fantastic and, ironically enough, bring these killers to life. Some of the assassins, such as John Wilkes Booth and Lee Harvey Oswald, are familiar to viewers, while others, like Samuel Byck, come from relative obscurity.

The tone and content of the play is dark and serious, but it has funny moments. Caroline O’Connor and Sarah Litzsinger steal the show as Sarah Jane Moore and Lynette “Squeaky” Fromme, who attempted to assassinate President Gerald Ford. Their chemistry and dialogue is so entertaining that you will find yourself laughing even when it feels a bit uncomfortable. They are planning a murder, after all.

The audience’s reaction was mixed during these moments. While some laughed, others sighed or cringed due to the darkly comedic take on the material. Then again, art is sometimes supposed to be uncomfortable in order to be provocative and relevant.

Aside from simply telling their stories, the story analyzes the psychology behind all of the killers. It also uses famous literary references, including lines from “Julius Caesar” and “Death of A Salesman,” to drive the point across.

All of the characters are mad, and all of them have different motives. Some want “justice from a tyrant,” some want fame, some attention and some just want to be loved. They all believe that they will find happiness with just the pull of a trigger.

More than to entertain and inform, the play’s main purpose seems to be to foster thought and provoke an important discussion. These people committed horrible acts and were often mentally unstable, twisted even, and yet during the performance, we are watching their lives and actions unfold before our eyes and can even identify with them at times.

“Assassins” remains especially relevant with the recent string of shootings in the United States.  In the “Gun Song” some of the killers sing “Why should you be blue/when you’ve got a a little finger/prove just how a little finger/can change the world.”

It’s a play that carries a message worth hearing, begging the question: Are the perpetrators of these acts simply seeking  “happiness” in the worst way possible? The cast and crew at the Rep superbly interpret Sondheim’s work, letting audiences explore these complex issues while still enjoying his signature dark humor and musical numbers.