Frodo lives at Marquette with Tolkien course and lecture series 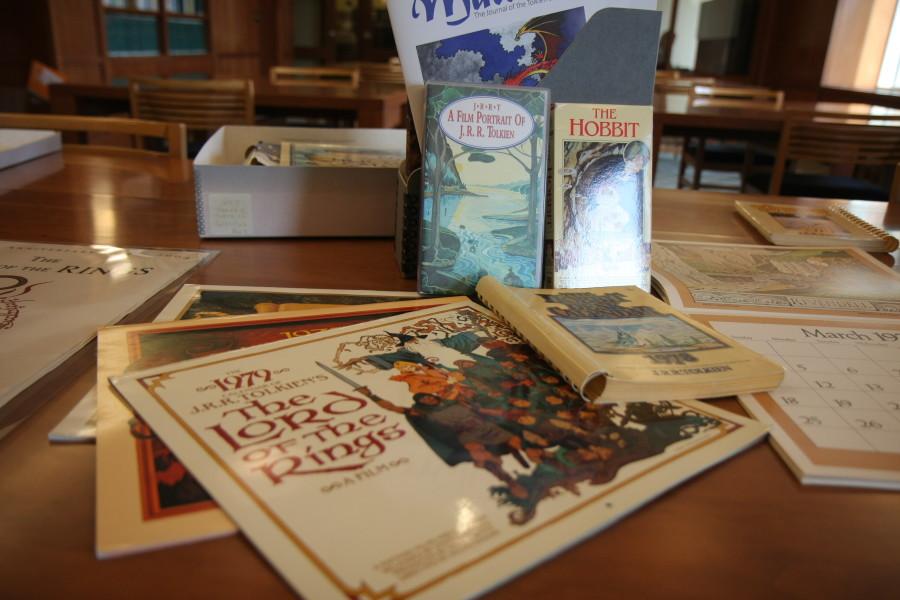 Marquette's collection of J.R.R. Tolkien's original manuscripts are getting a lot of attention with "The Hobbit's" 75th anniversary and the upcoming Peter Jackson film. Photo by Danny Alfonzo/daniel.alfonzo@marquette.edu

“In a hole in the ground there lived a hobbit.”

The story goes that this line inexplicably occurred to J.R.R. Tolkien one day in 1930, thus marking the beginning of  Tolkien’s first published fantasy novel, “The Hobbit.” Tolkien’s works have since garnered generations of loyal fans, ingraining themselves into fantasy entertainment and becoming a staple of any self-proclaimed nerd’s bookshelf.

This September marks the 75th anniversary of the original publication of “The Hobbit.” As home to the manuscripts of several of the author’s preeminent works – including “The Hobbit” and “The Lord of the Rings” –  Marquette  is commemorating the occasion by offering a Tolkien course and hosting a series of lectures on the author. The combination is sure to elicit Gollum-esque mutterings of “my precious” from Marquette’s Tolkienophiles.

Tim Machan, a professor in the English department, will be the first full-time Marquette faculty member to teach the Tolkien course. Machan comes well equipped to understand the famed English author. He specializes in linguistics and has led classes on Old Norse and medieval literature, subjects that Tolkien himself taught at Oxford during his academic career.

“The course will explore how Tolkien could go from lecturing on ‘Beowulf’ during the day to, at home, writing about Frodo and creating a whole new universe at night,” Machan said.

In addition to reading the popular tales of Frodo and Bilbo Baggins, Machan will cover Tolkien’s academic writing, poetry and translation work. The professor’s goal is for students to experience Tolkien as a whole author, to explore his intricate and meticulous writing methods and to follow the process of how the manuscripts in the university’s archives were developed into bestselling favorites.

According to Machan, one of the things that makes Tolkien unique as a writer and deserving of further study is the level of precision and detail in his work. “(Tolkien) spent his life fashioning the notion that there is another whole world out there,” Machan said.

In order to make this world seem vivid to readers, Tolkien wrote moon charts, devised systems of measurement, drew maps and characters, and even made several original languages, such as Elvish and Entish, specifically for Middle-earth.

The class will visit Raynor Library to study copies of the more than 11,000 manuscript pages in the J.R.R. Tolkien Collection, allowing students to observe the process of what Machan described as an “obsessive revisor.” The archives are filled with Tolkien’s extensive edits, including seven different versions of the first chapter of “The Lord of the Rings.”

In addition to the documents themselves, the Tolkien course will incorporate the series of upcoming events sponsored by the Raynor Memorial Libraries. In early October, John D. Rateliff, who studied Marquette’s Tolkien collection for more than 30 years, will be speaking on “How the Hobbit Came to Milwaukee” and will guest lecture a section of the Tolkien course. In addition, this November, the libraries will host a lecture by Tolkien scholars Wayne G. Hammond and Christina Scull entitled “J.R.R Tolkien and the Art of Middle Earth.” The lectures are open to all Marquette students.

William Fliss, interim curator of the Tolkien Collection, said this upcoming anniversary of “The Hobbit” is a “great opportunity to publicize the fact that Marquette has this wonderful collection.”

Along with the draw of the lecture series, Fliss anticipates a surge of Tolkien enthusiasts visiting campus after the December release of the first movie installment of “The Hobbit”, directed by Peter Jackson. In February, the libraries will host a roundtable discussion of Jackson’s latest film adaptation, featuring four Tolkien scholars from around the country.

Tolkien fans may also want to stop by the archives reading room on the third floor of Raynor Library to view a permanent exhibit of reproductions from the manuscript collection. In addition, one Friday afternoon every month this fall, Fliss will present selected originals for viewing.

With all these upcoming events, Milwaukee may begin to seem closer to Middle-earth.